Tuesday the 4th of June saw a team of us venture up north on a mission of inspiration and exploration. We were headed for the Roman town of Viroconium Cornoviorum (Wroxeter), with our sights set on English Heritage’s full scale reconstruction of a Villa Urbana (a high status Roman town house).

The building was constructed as part of a Channel 4 television programme that aired nearly three years ago, titled ‘Rome Wasn’t Built in a Day’, whereby six modern builders were issued the task of stepping back in time to build in the style of the Romans, using Roman tools and Roman materials. The construction process took around six months to complete (which isn’t bad when you consider they had a film crew breathing down their necks and providing constant distraction), with a few alterations and repairs carried out by EH in the last year.

We arrived and were immediately impressed by the presence of the structure towering boldly in the Shropshire countryside, with its garishly-Roman yellow walls, ochre-red banding and rows of ostentatious imperial white columns. The dual-pitched roofs were covered in weathered wooden shingles on the upper part and more traditional tegulae and imbrex terracotta tiles on the lower portion forming the portico.

Half the building was stone built with the other wing being timber-framed with wattle and daub infill. The former, included a hypocaust system heating the series of rooms which made up the bathing complex. The timber wing, made up the living portion of the villa with dining room, kitchen, bedroom, shop and slave’s quarters.

We spent a good few hours inspecting every inch of the building- noting down the timber joints utilised, measuring hypocaust tiles, sketching furniture, analysing door hinges, discussing roof tiles and quizzing members of staff. We then moved onto the real thing and spent the remainder of the day pouring over the standing Roman ruins of the actual town across the road. This included one of the tallest segments of Roman construction left standing anywhere in the country and a real insight into stone building methods utilised in the first few centuries AD.

With the planning decision looming ever closer, all the pieces are falling into place for our own reconstruction. We’ve learnt all we can from the experience of others, all we can do now is clutch Vitruvius’ manual on Roman architecture and dive head first into the world of stone, lime, terracotta and hard physical labour!

The covered portico at the front of the building

Some Roman wood working in action 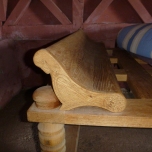 A carved detail on the bed 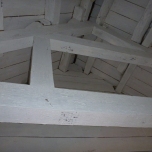 A view up into the rafters

The doorway into Wroxeter’s Villa