Human-powered lathes are ancient machines capable of shaping wood, stone, bone, antler and even metal into intricate pieces of art or functional tools and utensils. They are most commonly associated with wood, in particular Windsor Chairs, which were made by ‘bodgers’ working primarily around the Cotswolds. The modern term ‘bodging’ or ‘to bodge a job’, derives from the practice of woodturners to only manufacture the legs and spindles of chairs, i.e. only half a job.

There are many incarnations of lathes, ranging from the Ancient Egyptian two-person strap lathe to the highly specialised bow lathe. However, apart from depictions, the machines themselves very rarely survive. That said, Somerset has some of the earliest evidence for turning in Britain, with various Iron Age artefacts from Glastonbury Lake Village identified as being made with a lathe of some kind.

This image found in Mendelsches Bruderbuch dating from 1395, shows a much more robust pole lathe and a man turning what could be a wheel hub

A woodturner’s workshop from c.1640

Another more substantial fixed-lathe from 1568, showing some of the incredible artefacts manufactured on the machine, including bowls and musical instruments 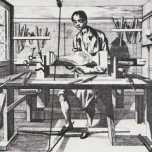 An 18th century turner in his workshop with a treadle-lathe.

Pole lathes rely on the energy held within a springy stick. This branch has a strap attached which runs down to a pedal, wrapped halfway along to the piece of work. The work is held between two lubricated points (usually greased with tallow), which are mounted on adjustable ‘poppits’, which in turn are held in place by substantial wooden wedges. As the pedal is pushed down, the work turns towards the user, allowing a chisel to be introduced. When the pedal is released, the work turns back and the chisel is withdrawn. Our new lathe is based on some of the later Medieval depictions and is constructed entirely of oak, with the two threaded points made of steel.

George Layley was one of the last true bowl turners, who made wooden bowls for the ammunition factories during the Second World War 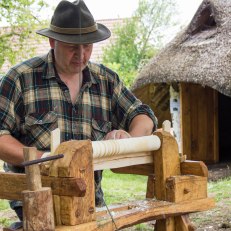