Due to foul weather in January, the second in our series of workshops on prehistoric metallurgy, was postponed until now. With Spring gagging to break Winter’s grip it was time to attempt some ancient alchemy and turn rock into metallic iron.

First thing first though, we needed some of this rock. So, after consulting a local archaeometallurgical expert, Dr. Lee Bray at Exmoor National Park, I ventured onto the moor to pick up a few lumps for our use.

With this in hand, we could crack on and attempt to smelt some nice shiney bits of iron. The process is a long and complicated business, taking at least two days to complete, not including all the preparation. The first thing we undertook, well before the fateful weekend smelting event, was to construct the furnace. This was done with help of students from Strode College, who happily worked the clay/straw mix into malleable bricks which we could build up around an internal former of bundled reeds. The structure could then be left to dry for a week or so (in our case, a month or so!)

The Saturday of the smelt rolled in and we began the process by roasting our ore in a huge oxidising bonfire- with the rock sandwiched between layers of wood within the pyre. This was set alight and left for most of the day.

While these pyrotechnics were occurring there were other jobs to get on with. This included sorting the charcoal; breaking it into regularly-sized lumps, sieving it and removing any un-charred ends. It is worth noting that the charcoal has to be hardwood and of exceptional quality- not the rubbish you pick up in a petrol station. Once this had been done, it was re-bagged and put to one side in anticipation of the big burn.

The next mission was to get the bellows sitting in a stable position, in the correct angle relative to the ceramic tube that will be sending the air to the heart of the furnace (the tuyere). Luckily, we had master-bodger Richard Devaney on hand to make sure this was sorted swiftly and properly. During this time it was also a good opportunity to have a bash at making sure the furnace is looking tidy- cracks in the clay sealed, tuyeres sealed and sacrifical door into the furnace sealed.

The day came to a close raking out the ore from the gurt blaze and starting to break up the lumps to regular, pea or bean sized lumps- a process that would continue throughout the following day. 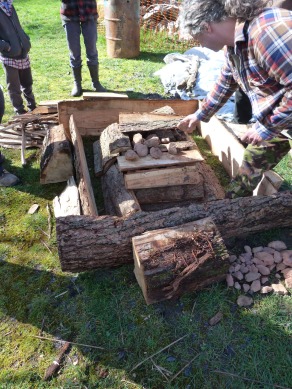 The fire burns down to reveal beautiful grey-red-purple ore!

The roasted ore fresh from the fire.

Sorting the charcoal- breaking it up into convenient sized lumps and sieving the dust out. 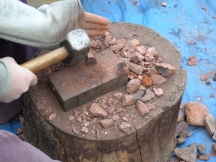 Crushing the iron rich rock to a uniform pea-size

Our crushed and sorted ore.

Sunday morning, bright and early, the furnace was lit and a wood fire stoked to warm the thermal mass. This was kept going while we devised the ‘charges’ of ore and charcoal that would be going into the roaring furnace. We were using a ratio of 1:1, by weight of each. This involved setting up a simple balance scale and finding appropriate vessels that could be used to measure the charges throughout the process.

As the fires heated up, we began the smelt proper, by filling up the stack to the brim with charcoal and allowing the heat column to rise up the furnace. After half an hour of noxious white smoke gradually turning clear, I lit the gasses with a flame and we began bellowing in earnest as the beast began to roar.

Taking shifts on the bellows, we forced air into the furnace for the next five hours. As the charcoal burnt down, we added charges of the roasted ore, then more fuel to keep the monster raging.

Problems started arising about three quarters of the way through, when we noticed the blasts starting to have less effect and the charcoal took longer to drop down the shaft. Some quick prodding and probing up the tuyeres soon cleared the blockage, but the temperatures had dropped noticeably. It was then a slow downward descent at the most crucial part of the process. We tried all sorts to keep things going, but as we were to find out later- the slag had solidified within the furnace and created quite a large solid mass that began restricting air, iron and fuel moving within the structure.

Time passed quickly now and the end of the day soon approached. We let the furnace burn down and crossed our fingers for something… anything! As we opened the belly of the now dormant volcanic beast and allowed the contents to spill out we could begin to understand why we had failed in the pursuit of iron. Solidified slag had caked the ends of the tuyeres quite substantially, with particularly dense material (the beginnings of a bloom perhaps…?) adhering to the upper part. Above the slag tapping arch, above and between the tuyeres, a huge block of slag had vitrified with the clay lining of the furnace- this was exactly the kind of stuff that needed to be removed from the furnace whilst in a molten form. We were just too late and didn’t sustain the heat for long enough.