William of Malmesbury, writing around 1130 AD, records a legendary visit of St Bridgit (or Brigid) to Beckery in 488 AD where she left behind some relics including a bag or wallet, a necklace, a small bell and some weaving implements. These relics were on display to pilgrims who later visited the chapel that was dedicated to Brigit, and there was even an opening in the chapel wall thought to bestow forgiveness on those who passed through it. The name Beckery may derive from the Irish for ‘Little Ireland’. These links with Ireland’s premier female saint have been treated with sceptisism and were seen by some as a thinly veiled attempt to drum up the pilgrim trade, as were other legendary assocaitions with King Arthur. However radiocarbon dating of the monastic cemetery at Beckery has unexpectantly suggested that there was indeed a monastery at Beckery by 488 AD that St Brigit could have stayed at. Isotope analysis is now being carried out on the monastic skeletons to see if any of them could also have originated in Ireland, as Brigid did. The intial results are inconclusive, the monks could be local people or from several other parts of western Europe including Ireland and France. More work is being done on lead isotopes which will hopefully be more conclusive. 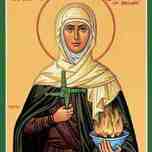 One response to “Did St Brigit visit Beckery?”