This week some experimental wood steaming took place, using a Viking method for steaming ship planks. We were trying to form part of a curving door frame to replicate the late Saxon (AD 1032-1040) door at Hadstock church in Essex. Green ash poles were used that had been cut down 2 days previously. They were suspended over a glowing fire using the traditional chair and chain technique and turned over every 2 minutes after a basting with hot water applied with a mop. After about 20 minutes the pole was gradually bent round a former, composed of peg holes that oak pegs were placed in, as the bending took place. The pegs held the wood in shape until it had cooled. Some splitting took place on the outside of the curve but a useable piece survived after removal of the split side. A fairly successful first attempt and a good excuse to be around a hot fire on a cold day.

basting the poles with hot water from the cauldron

the ‘former’ forming the shape of the door

pegs holding the pole in the former 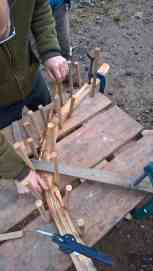 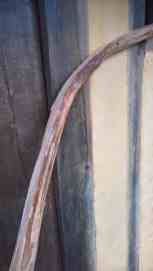