During the  Avalon Marshes Landscape Partnership project, two dug out canoes have been built, based on local archaeological examples from the Iron Age.

The first one was an oak example based on later prehistoric vessels. This will be similar to the Shapwick canoe now on display at the Museum of Somerset.  As a experiment it was fitted with an outrigger, which gave it much greater stability. The attachment was made using treenails at the ends – a feature found on the original.

The second canoe was a beech dugout, based on a find from the foundations of Glastonbury Lake Village. It was fitted with a separate transom board at its wider end, like many prehistoric canoes.

You can see a video of their launch on Shapwick Heath Reserve, courtesy of the BBC.

More information on the canoes and paddles can be found by clicking here.

Keep an eye on our blog to stay up to date with our progress: 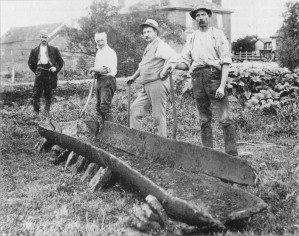 The Shapwick Canoe’s discovery in 1906.

2 responses to “The Dugout Canoes”

This site uses Akismet to reduce spam. Learn how your comment data is processed.