Activity continues on both buildings despite being too cold for rendering. The cob walls inside the Roman building are being straightened out in preparation for plastering and the spaces between the uprights of the Saxon hall are being filled with wattle and daub.

The gable end facia boards have been put up and look fabulous mainly due to Mike’s skill with the final carving, but they have been a real team effort. The images are derived from Anglo-Saxon metalwork, as chosen by the volunteers. Make up your own story about what they mean. All highly symbolic, and more than a bit watery, as is appropriate for the Somerset moors. 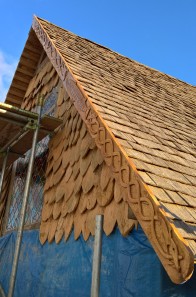 I think they missed one