Some rather intricate carving work is going on to decorate the interior of the Saxon hall, with a design taken from Saxon stonework from Somerset. The Roman building is turning white on the inside as the first harling coat is thrown on. In response the Saxon longhall has begun to turn yellow courtesy of iron oxide pigment slipped into the limewash. Is this good, or should all early medieval replica buildings look as drab, dark, dirty and unornamented as possible? Discuss in not more than 500 words (or 140 characters if tweeting). Meanwhile inside the building, sticks have appeared on one wall. A homage to the naturalistic art of Andy Goldsworthy or are there other plans afoot. Find out in next week’s gripping episode…(at least we hope it’ll grip, hint, hint)… 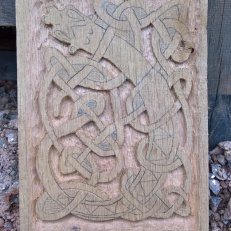 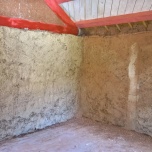 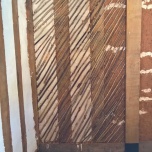 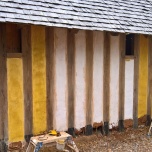 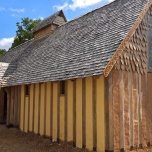